Joro-Gumo is a Boss in Nioh. The player will have to face this yokai in order to proceed with the game.

Pronounced JOH-ro GOO-mo. A horrific fusion of a woman's torso and with the lower body of a spider. Ensnares humans in her sticky threads, then devours them alive. In spite of her giant size, can freely climb walls and ceilings. Her arachnid legs are covered in a thick shell, making them highly resistant to damage.

The Joro-Gumo is yokai with the limbs of a spider and the torso and head of a female woman. Vicious, fast and deadly, this troublesome enemy will do short work of the ill-prepared, luring young men in with her sexual appeal to feed on them.

The strategy to take her down is to first dodge to her rear and attack the glow on her back. Keep doing this until she moves to protect her back. When she does this, attack her from the front and dodge her attacks. Dodge away again when she attacks. Keep this pattern up until she is lower on health at which point she becomes signifcantly deadlier. During this lethal portion, having conserved your Guardian Spirit to this point will help finish her off wihout suffering a powerful one hit.

Joro-gumo has two attack phases. The first phase lasts until she has ~60% health remaining.

女郎蜘蛛: Jorogumo - "Woman-Spider". In Japanese Folklore, when a spider reaches 400 years of age, it gains strong magical powers and a hunger for human males. Cunning and dispassionate, the spiders shapeshift into young and beautiful women who use their sensuality to lure young men to feed on. They are said to lure samurai with their beauty and by playing music graciously, only to them poison them and spin silks to trap them for eating. In some stories, they are capable of controlling other spiders, commanding an army of arachnids to their aid.

Despite the wide negtivity towards this yokai, there are instances of Jorogumo in folklore that resulted in actually worship of them as a God that may prevent people from drowning. 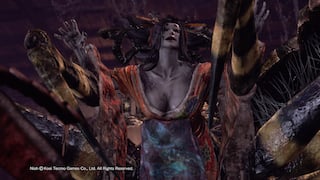 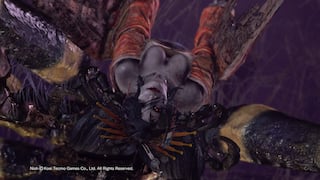