Nue is a Boss in Nioh. This is the fourth Boss that players will encounter. The player will have to face this yokai in order to proceed with the game.

Possesses a monkey's face, a tiger's torso, and snake for a tail, Nue is a fearsome creature of lightning. In addition to mauling prey with its claws, its roar can summon bolts of lightning, almost as if Nue itself were an embodiment of thunderstorms.

Pronounced New-ay. A yokai chimaera.  Its fanged mouth terrorizes its prey with an eerie cry. Nue is wreathed in dark smoke, making it diffcult to discern its overall appearance. Its ability to summon thunder has earned it the alternate name of Raiju, the thunder-beast.

Possesses a monky's face, a tiger's torso, and snake for a tail. Its mane is quilled and sharp enough to cut any who approach, In addition to fierce claw and fang attacks, it can hurl itself bodily with enough force to smash a stone wall. There are many legends of Nue appearing in Japan, unleashing lightning and causing all sorts of disasters.

One legend holds that a fearsome cry heralded the appearance of a Nue over the royal palace in Kyoto every night, draining the young emperor of vitality. No medicine could cure him, but after the samurai Minamoto Yorimasa was felled the Nue with an arrow, the emperor recovered at once. Yorimasa was bestowed with a beautiful sword called Shishi-Oh, King of lions, as a reward.

An effective method against Nue is to use a spear and/or low stance. Wait for it to initiate its lightning or poison attacks and then quickly dodge to the left of its head. Then attack with some quick combos. While breathing lightning Nue can not defend itself and is open for more attacks. Eventually as you damage Nue, its ki will drain leaving it briefly vulnerable for you to dish out some pain. You may consider conserving your Guardian Spirit for this exact moment to finish the job.

Get behind his front right leg - this is a massive weak spot for him as his claw attacks cannot hit you, and he frequently uses the claw attack and lightning breath when you are in this placement. You will have to run away from his lightning summons and block his tail swipe, but then you can immediately run back behind his front right leg. You should be between his two right legs and you will be able to almost constantly spam attacks.

Look around the area, there is a pegoda-like structure with sidings that can be destroyed but not the roof.  Hide under the roof and you can avoid Nue's lightning strikes, and the columns will prevent Nue from entering into the structure.  Use a long reach weapon/stance and attack repeated, remember to back dodge when Nue spews poison mist.

Main Mission: A detailed Strategy goes here. It should feature details on the build, level and recommended weapons and items as well as counters for specific attacks.

Sub Mission: The strategy for this mob is the same as in the main mission.

Use high stance only. There are two trees in the boss room, one either side of Nue, and you need to keep one between you and him at all times. When Nue does his lightning breath attack, run to his left side around the tree and hit him with the ball toss of the kusurigama then retreat. Repeat this process only when he does lighting breath or he leaps at you and falls on his side. It can also be done when he rolls but it is more risky. Only leave the tree to dodge his lightning strikes by rolling or running fast in one direction then move again to the trees. Do not try hit Nue more than once with a ball toss of the kusurigama, he will do a swipe attack that does a lot of damage or he will do a tail spin.

Nue has two attack phases. In the first phase, ??. In the second Phase, ??

鵺: Nue - "Night Bird" (Unknown bird, strange bird). These Yokai of Japanese Folklore have the head of a monkey, the body of a Japanese Racoon (tanuki), the tail of a snake, and the limbs of a tiger. They, however, produce a sound such as a bird.

Legend says that around 1153, Emperor Konoe fell ill in Kyoto, thrashing in nightmares. As lightning struck the Imperial Residence, the Emperor summoned the samurai Minamoto no Yorimasa, who then used his archery skills to struck down a flying beast from the sky said to be a Nue. The emperor returned to health immediately, but the citizens of Kyoto feared the beast's curse and sent its corpse down the river. The burial boat arrived at Hyogo Prefecture, and the villagers there gave a proper funeral and burial to the beast. People travelling to Nuezuka in Matsuhama Park in Hyogo may visit the alledged burial mound to this very day. 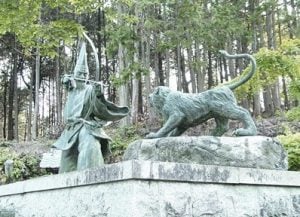 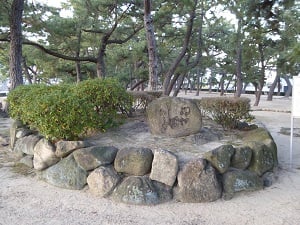 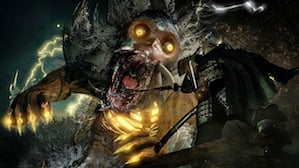 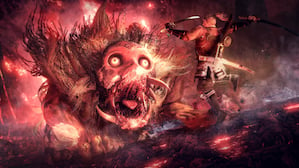 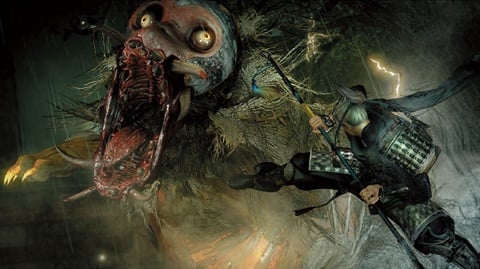