Onmoraki is a Boss in Nioh.

Onmoraki are said to be demon birds born from the feelings of resentment and negative Ki emitted from corpses that failed to have funeral rites performed on them. According to ancient texts found across the land, the demon birds release shrill cries as they flap their wings, and their eyes are the only part of their large pitch-black bodies that emit any light, glimmering like flames. One corpse contains enough negative Ki to produce and onmoraki comparable to that of a large bird in size, however a large number of corpses can give birth to an onmoraki of extraordinary proportions.

Onmoraki come from the bodies of the recently deceased. When people die but do not receive enough memorial prayer, their life energy can transform into this grotesque, bird-like demon. The name onmoraki comes from a play on words emphasizing demonic interference with achieving Buddhist enlightenment. The first part of the name, on, comes from onmyō, the Japanese word for yin and yang. On represents yin, the shadow, the unseen, and hidden, secret things—in this case it refers to demons which live in the shadows and in the hidden parts of the world. The second part of the name, mora, refers to Mara, a Buddhist demon who personifies unskillfulness, impiety, and the death of the spirit—a reference to the poor quality of memorial services which cause this yōkai to come forth. The last part of the name, ki, simply means demon—emphasizing the fact that this monster truly is a demon. 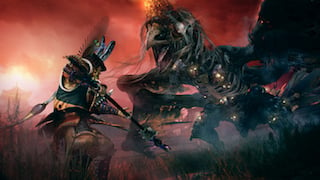