Toyotomi Hideyori is a Boss in Nioh.

The son of Lady Yodogimi and warlord Toyotomi Hideyoshi.

"The son of Hideyoshi and Yodogimi, Toyotomi Hideyori was raised from birth as Hideyoshi's successor and groomed to be ruler of the Toyotomi clan. While still a child, he was made ruler after his father's death, but in truth, he was merely a puppet of Yodogimi, who held all the power. Reticent and with a handsome, fair-skinned complexion, Hideyori looked nothing like his father, and it was rumored that he was not the true child of Hideyoshi. After losing most of his territory in the battle of Sekigahara, Hideyori rapidly lost his ability to unite the land. When Tokugawa Ieyasu demanded allegiance, Hideyori refused under the guidance of Yodogimi and attempted to retain what authority he possessed. However, the inscription on the bell at Hokoji Temple in the capital was labelled as a curse on Ieyasu, further adding to the conflict.
When the Shogunate demanded a system of relocation for the nation's daimyo, along with the holding of hostages, Hideyori and Yodogimi rose in rebellion. Believing Ieyasu's words to be nothing more than mere sophistry, they enlisted the aid of Sanada Yukimura and other ronin, and engaged the Tokugawa army in battle at Osaka. Thanks to extraordinary efforts of Yukimura and the other ronin, Osaka Castle did not fall to the enemy, and both armies, exhausted from the skirmish, were able to broker a temporary peace and vowed to resolve the conflict at a later time. However, the loss of its main moat left the main keep virtually defenceless, and the castle was forced to turn to the use of spirit stones as its last line of defense." 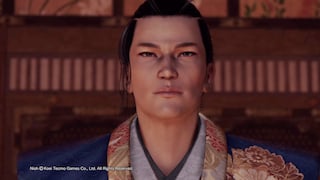 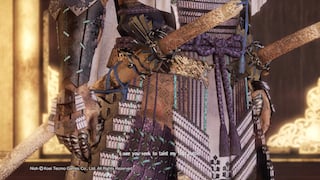 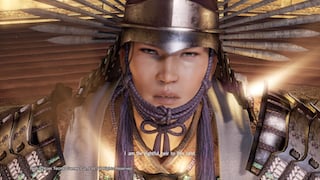