Nioh (仁王) are wrath-filled and muscular guardians of the Buddha standing today at the entrance of many Buddhist temples in East Asian Buddhism in the form of frightening wrestler-like statues.They are dharmapala manifestations of the bodhisattva Vajrapāṇi, the oldest and most powerful of the Mahayana Buddhist pantheon. According to Japanese tradition, they travelled with Gautama Buddha to protect him.

The game follows the adventures of William (based on real historic figure William Adams) and how his strength to defeat Yokai lead some to fear, some to worship him, but all to call him "Nioh" for the capacity to slay demons. (Only in game, of course. In real history his Japanese name was Anjin)

The word Yokai is used in Japanese to refer to spirits and demons: a combination of "bewitching and apparition", but are not necessarily seen as evil, as some are thought bring good luck.

Japanese folklore often represents these creatures as having animal features or shapeshifting abilities, and attributes them the domain of the world between life and death. Details of each Yokai are provided on their individual pages, so read those to understand each one. 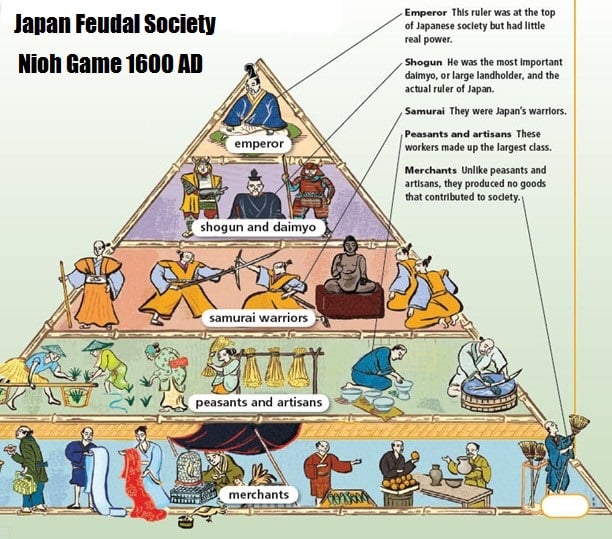 In Japanese, the surname comes first, then the name. Japanese commoners had no surnames until the Meji restoration, that happens after the game. Commoners in this time period would use something descriptive in the place for a surname. For example "Field worker" Or "Mountain Dweller", etc. Japanese Samurai and Aristocracy had surnames assigned to them by their ruled land or achivements.

石: Koku - A unit of rice (44.8 gallons/180 liters) was used to measure wealth, it is considered that one Koku may feed a grown man for an entire year. In the Nioh time period, a Samurai might earn 100 koku a year, whilst those ruling over an income of 10,000 koku obtained Daimyo status.

大名: Daimyo - Meaning "Great Name", refers to leaders of large military groups that held political and military control over an area. These lords commanded retainers that "kept the peace" and set the law of of the land. They were eventually united into a unified ruling class in the Edo Era (1600 AD)

将軍: Shogun - Military ruler of Japan, de-facto governing although in many times appointed by the Emeror. It was originally a transient position, but it was made hereditary by the Minamoto clan in 1192, and later on the Ashikaga clan and Tokuwaka clans. The rank saw its last appointee in Tokugawa Yoshinobu who resigned from it in 1867.

幕府: Bakufu - Term used to refer to the headquarters or the government of a shogun.

忍び: Shinobi - A Ninja. A mercenary or covert ops agent for a Japanese lord. They employed "dishonorable" methods such as guerrilla warfare, espionage, and other activities that "honorable" Samurai and Warriors could not engage in. During the Sengoku period, the Iga province became famous as the "homeland of the ninja" and is the home of Hattori Hanzo. A female shinobi is called Kunoichi.

切腹: Seppuku - Harakiri, Suicide. This special type of honor death follows the "Bushido" or path of the warrior. Often practiced by the "honorable" tiers of society, such as Samurai, it allowed a combatant to die with honor rather than be captured and possibly tortured or dishonored in captivity. Outside battle, it became a way for families to attone for grievious sins such as treason without plunging the entire clan into war. Ritual seppuku had intricate formalities attached and provided an attendant that would behead the subject and end things "quickly". Seppuku is still practiced by suicidal Japanese although it is extremely rare and by no means encouraged or lauded - with famous cases in 1970 and 2003.

Japanese history is divided in reigning periods, and the Japanese years are to this day counted by the years of reign of the current monarch. Japanese history officially "starts" with the end of the "Age of the Gods" and is marked by the ascencion to the throne of the direct descendant of the Sun Goddess, Emperor Jimmu in 660 BC (Before Christ). Below is a minimal timeline of some relevant events that will help players understand the historical makeup of the game.

You may want to read this simple article about the Battle of Sekigahara. Or watch the video:

The difference Oda Nobunaga made on Japanese history, graphically: 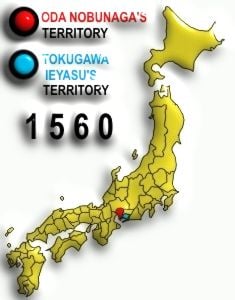 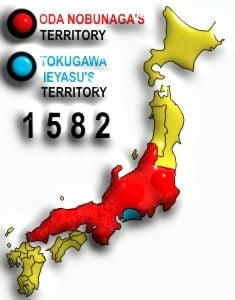