Nurikabe is an Enemy in Nioh.

"The yokai known as Nurikabe (noo-ree-kah-beh) take the form of a giant living wall. They are said to most enjoy simply standing where no wall should be and enjoying the unease and confusion of travelers. If left alone, they will not move, but if harassed they extend long arms to strike back in rage. Slow-moving but with immense strength and stamina, Nurikabe are formidable foes."

"Nurikabe often block the way to valuable items or alternative routes to destinations, although whether they do so knowingly or not is unclear. Once a Nurikabe is angered, there is no alternative but to defeat it, but it is said that the right gestures can charm them into a more amiable attitude." 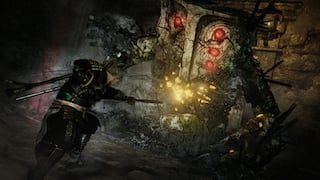