Onryoki is a giant red demon born from the amassment of vengeful spirits. Half its face is a burning flame of anger, while the other half is warped by grudge. Countless spirits give it an eerie appearance, and horrendous voices emit from its body. Most would want to avert their eyes from this horrid demon.

Pronounced "on RYO key." A huge red oni born from a pack of angry ghosts. Half of its face is contorted in anger, the other twisted with grudge. The faces of countless vengeful ghosts appear across its body, letting out shrieks that send terror down the spines of all within earshot.

Filled with fury and grudge, the sight of a living human sends it into a berserk rampage. Its preferred attack, using iron balls and chains draped over its body, is powerful enough to defeat even highly experienced samurai.

The two horns on its head emit a weird glow. It is said that horns represent the source of power for an oni, meaning they lose their strength if their horns are damaged. But only the most powerful and precise strike could hope to shatter them...

In phase 2 he will break the chains and start throwing the balls at you. Simply stay as close to him as you can and attack. Be mindful because even without his balls, his close range attacks can hurt. This strategy works for both the fights in the Sub Missions

Sub Mission: The strategy for this mission is pretty similar to the Main Mission version. Repeat the same techniques of staying in his back pocket and block when he spins.

The Blessed Village: The above melee strategy will work fine as his attacks remain mostly the same. However, in his first phase, he is able to link a Smash attack into a Spin attack with almost no delay. In his second phase his attacks again remain the same except for his Ball Toss. Instead of picking it up, turning, and then throwing the ball, he throws it along the floor as he turns. Try side-stepping as you see him bend down to pick up a ball.

Onryoki has two attack phases. In the first phase, Onryoki uses his weapon as a flail. The attacks are generally slow but have insane range. Upon breaking his chains, Onryoki switches to his second phase where both his attacks and movement increase in speed. In addition, he'll throw his metal balls at William when given the chance. 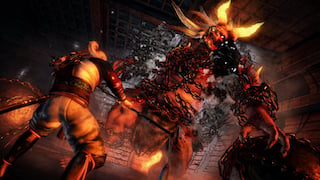 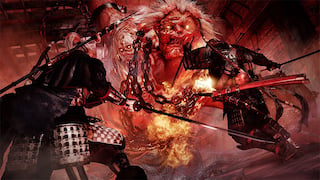