Okatsu is a NPC/Boss in Nioh. This is the 23rd Boss that players will encounter.

Okatsu is a fictional character created by Koei Techmo in their game Kessen. She is named after and based on Tokugawa Ieyasu's noble concubine, Eishoin, and is usually depicted as a female warrior or samurai. In Nioh, Okatsu is Ieyasu's daughter. She rebelled against her father's cold hearted plans, and chose the life of a ninja.

Okatsu features quick but weak attacks. Dodge her combos and break her guard with heavy attacks. Keep pressing your attacks and focus your approach on keeping your Ki up. If you have Spearfall you can use it to knock her to the ground. Make sure to attack her when she's glowing yellow, as that is when she is most vulnerable.

Okatsu can be beaten entirely with parries. You will need a katana with the Haze II skill unlocked and this can be done with any build. When she is charging her lunging slash, parry it as soon as you hear the sound and then press square again for a thrust that will knock her down. Go up to her and do a final blow. Repeat until dead.

No specific build is necessary (an onmyoji build does help here though) as this can be done with moment talismans. It should also be noted that this strategy does not work when you fight her in one of the dojo missions. Use the moment talisman, with  Daiba-washi active, and it'll knock her down. Final blow and repeat until she is dead. If you run out of talismans, use spirit stones to charge your amrita gauge and use your spirit's special attack while in living weapon mode to finish her off. If you have a magic build, guardian spirit talismans work here too.

If you choose the spider guardian spirit and get the guardian talismans, the spider's automatic slow grately reduces the speed of All of her moves, she even somewhat floats in the air. If the slow can be mantained on her, she becomes a gently swaying punching bag.

Okatsu has two attack phases. In the first phase, she charges lunging attacks as well as kick combos. In the second phase (when she has ~80% health left), she receives a buff from her guardian spirit and also does an aerial lunge.

Okatsu is a female ninja or "kunoichi" under Hattori Hanzo. Trained in the same I ga ninjutsu as Hanzo, she accompanies William on his travels. Kunoichi are as skilled as warriors and spies as male ninja, but are also able to masquerade as powerless women to encourage targets to let their guard down, or disguise themselves as maids to gather information. Katsu's mastery of every aspect of the ninja way is said to rival even her teacher Hanzo's and makes her a strongly trusted figure.

Okatsu's father is Tokugawa leyasu. Her elder brother Nobuyasu was killed at an early age, allegedly to ensure the safety of leyasu himself. She has borne a grudge against leyasu ever since, and left his household as soon as she could to study under Hattori Hanzo. She despises not only leyasu but all samurai — and, indeed, the entire bloody, warlike world she is forced to live in.

Okatsu has spent years under Hanzo, gathering rumors about yokai and information about strange phenomena likely to be Amrita—related from around the country. She is highly experienced and a master of disguise, able to infiltrate any location. Okatsu is skilled in the art of the kodachi dagger and the shuriken throwing—blade, but considers these a last resort, as she is reluctant to harm people, even for the sake of the mission.

At first, Okatsu was suspicious of William, a foreigner who claims to be able to see spirits, but she eventually warmed up to him. In William, she feels great ninja potential, seeing him make more effective use of his skills than she ever could. But, at the same time, her competitive side will not let her defer to him so easily, and when she crosses baldes with William she does so in deadly earnest.

Over the course of their battles, Okatsu became interested in, even fond of William's way of thinking and approach to life, so different from the Japanese samurai she knew. However, she never revealed this interest to William, and he left Japan without saying a word to her. For her part, she made no attempt to follow him or persuade him to stay. 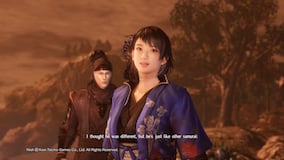 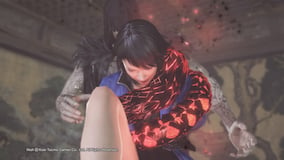 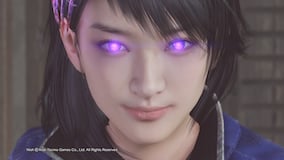