Gasha-Dokuro is a Boss in Nioh. This is the ?? Boss that players will encounter. The player will have to face this yokai in order to proceed with the game.

Gasha-Dokuro is a gigantic yokai born from the remains of the fallen soldiers at Sekigahara. Even in spite of its power and the number of souls needed to create it, the Gasha-Dokuro is merely a distraction, set up to buy time for Kelley to enact his real plan.

The activated Living Weapon works very well given that it will replenish due to the orange crystals.

Obtain the item needed to alter the red crystals’ color from Tenkai - this will help you a lot when dealing with the Gasha-dokuro later on. Once the fight starts, remember where your "starting position" is and how to get to it. This will be important later on in the fight. The first thing you need to do is break the glowing amrita stones in one of its hands or feet. Once you've depleted the health bar over one of these limbs, run back to your starting position while Tenkai restrains the Gasha-Dokuro. Hanzo will then call in an artillery strike, and the Gasha-Dokuro will fall down, with its head landing on the ledge where you began the fight. Active your Living Weapon and deal as much damage as possible before the boss gets back up. Keep breaking its limbs and smashing its head until the boss is dead.

Assuming that you interacted with the large red crystal next to the entrance to the boss arena, you shouldn't have to worry about running out of Living Weapon energy, as the white circles on the ground will keep replenishing it while you stand inside them.

If you've broken both of the boss' feet and are having trouble reaching its hands, there's an easy way to do this. Stand on the ledge just underneath your starting point (where the boss' head lands) and bait the boss into slamming one of its hands down on your position. Once the boss has done this, sprint up to your starting position and perform drop attacks on the hand until it breaks.

There are two places where you are generally safe from his attacks, one is on the slope next to the slope that lead to where you hit him when he felt down. Another one is a small corner on the far right of the map.

Use Hayama arrows to shoot him in the head for heavy damage.

Gasha-Dokuro only has one attack phase.

Gashadokuro (literally "starving skeleton") are yokai that are said to be born from the amassed bones of people who died from stavation or in battle and have not been buried. They take the form of skeletons that are several times taller than humans. They roam at midnight, grabbing lone travelers and biting their heads off so that they can drink their blood. 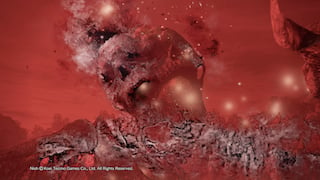 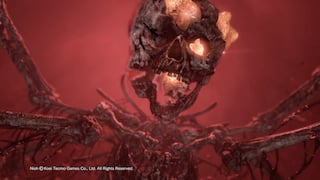 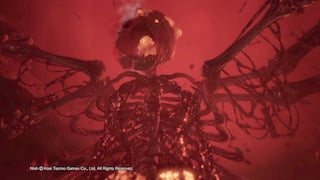