Hino-Enma (飛縁魔 ) is a Boss in Nioh. This is the third Boss that players will encounter. The player will have to face this yokai in order to proceed with the game.

Hino-Enma is a beautiful but deadly yokai that lures men to their demise. Slender, agile and sensual, her attacks are as accurate as they are swift and deadly. Without missing a step on her high shoes and fashionable umbrella, she may paralyze those looking upon her to drain their life force.

Pronounced "HEE no En mah'". A yokai taking the form of a young woman. Deceives humans and drinks their blood. The name HinoEnma literally means "flying bad luck," and she is believed to cause all manner of troubles and misfortunes. She is believed to have been born from the angry soul of an innocent woman senselessly struck down in the heat of a battle.

Drinking the blood of men to replenish her life force and beauty, she hides her aggression - and insanity. Her malevolence is well known enough that her name has been used as an idiom for misconduct since times of old. Obsession is a cruel mistress.

Enchants men to immobilize them, then sucks their blood and Ki life-force. The insidious part is that your mind may remain clear while your body freezes like a stone. When you face the HinoEnma, make sure to carry effective measures for paralysis.

These types of humanoid creatures  show relations to that of Vampires (Vampir to German/French mythology), who also feast on blood, fly like a Bat, and posses dark powers.

She has 2 kinds of ranged attacks: projectile attacks with either spikes or a blast of wind, or a dash to you that slams you. Up close she has a combo attack, and landing hits builds your paralysis meter. Her ranged wind attack will paralyze you leaving you open for a one hit kill. It's important to dodge to the side when she initiates it. Ideally you want to stay relatively close to her, dodging away from her when she attacks. When she fails to land her combo, she is open for several hits. You may consider using the spear in this case for its increased range. Dodge away and wait for her to miss another combo, and close in to attack. Keep repeating this process. The key with her is reacting quickly, she is quite fast so try and anticipate her movements.

You may also considering leaving her at range and letting her come at you with her rush attack. Use low stance to have the quickest dodge and avoid the move, and switch stances to attack her up close, strafing and dodging her combo and attacking everytime she misses. Don't get too close to let her get you, so try a spear here for its range.

This strategy is built around the same principle as the first strategy of using a spear for a little more range, but with a little more complexity and ki management. The kusarigama's high stance heavy attack is a long range attack where you throw the weighted end at the enemy. It has more range than any other melee weapon and does solid damage. As soon as you throw the attack out, drop into low stance and start dodging. Low stance dodging uses less ki and is faster, allowing you to hop away with little delay or windup between steps. There are some other variables that can speed up the fight, but this basic strategy will carry you through.

To begin the fight, she will do a charge attack directly at you. Dodge to the side and start swinging. Either just use high stance strong attack or high stance light attack if you are confident in your position. After a few hits or one throw attack, drop to low stance and dodge back. This fight doesn't really have phases, so you have to watch for basically all of her attacks. For her taijutsu or umbrella attacks, just dodge back and perform a high stance strong attack followed by more dodging. If she winds up for her whirlwind kicks, spam dodge back and outdistance it, or dodge through the attack and attack her from behind. Do not be afraid to just sprint away if she is spamming a certain attack to reset your positioning or to move away from a wall, just be wary of her paralyzing magic attack. She screams right before she does this attack, so just listen and be ready to dodge a few times.

Once she has been hit a few times, she will start using aerial attacks to. This isn't a phase as she may do it only once or multiple times. She will use one of three attacks in the air. She will either throw out needs in a fan or throw her paralyzing magic attack out. The magic attack has the same audio cue, but either attack should just be dodged using low stance dodging. Her final attack is a diving attack. If you are under her, she will slam into the ground. Just block through this one as the area is extremely difficult to dodge out of. If you are further away, she will drop down and do her diving attack. Just like at the beginning, if you can dodge so that you are close to her when she finishes the animation, high stance light attack will hit her multiple times.

The major variables for this attack are how many times you can get the multi-hit kusarigama attack on her and her grapple attack. When she tries to grapple you she just lunges forward. If she hits you it does quite a bit of damage and heals her. If she misses, she is vulnerable to a full high stance light attack combo. This is your best chance to stagger her to the ground. Once she is on the ground, only get one full combo in before backing up. If you are too close she will do a faster grapple attack that can catch you from the ground.

In the end, don't be greedy. You never have to use more than the longer range attack and dodging if you aren't confident in your dodge positioning after she attacks. A few anti-paralytic needles wouldn't hurt either.

This strategy requires the sword with the sword ki skill (L1+triangle) unlocked. Stay mobile in your low stance to dodge the paralysis waves she shoots at you. You'll know they're coming by her grunts. The key to this strategy and using the sword ki skill every time after you dodge her attack. Stay just outside of her 2-3 hit combo. Use 1 ki attack at a time and do not be greedy. When her ki is sapped, she will yell and drop to the ground. Switch to high stance on your sword or switch to your other weapon and hit her twice. If you are close to her body, she will get up and try to grab you. Back off and attack her while she recovers from her grab. She will regain ki but be sure to purify the area quickly so that she doesn't fully regenerate it. Back off and switch back to low stance and repeat this until she is dead.

During the Hino-Enma's aerial phase she is highly vulnerable to projectile weapons and will have her stamina heavily drained if she is hit. When she is in her aerial phase, use of Shuriken and kunai will causehuge stamina damage and cause her to plummet. Long-ranged weapons such as bows and rifles can also be used, but should only be utilized if the player is confident in their reflexes. Handcannons are not recommended due to their slow setup. Also note that Kayaku-dama and other bomb type weapons are also not usable for this strategy.

Shikin-gan pills ( ninjutsu ) , and anti-paralitic needles can remove paralysis. Considering that the pills cost a single ninja point, it is recommeded to learn them. Paralysis accessories also help. 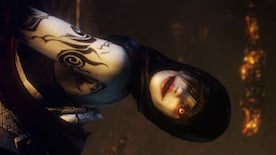 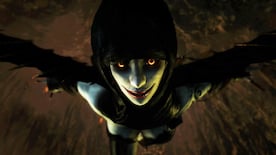 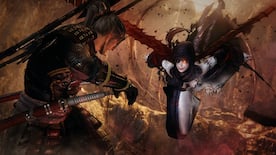 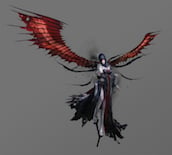