Tachibana Muneshige is a Boss in Nioh.

Tachibana Muneshige was considered the greatest samurai of western Japan by many during his lifetime, only matched by Honda Tadakatsu in the East.

Shoot the honourable guy with a bullet to the head at start, when he felt down, quickly run to his back and stab him and land a couple of hits when he's standing up (or throw at him a bunch of debuffs). Free 3000+ damage, save you ten hits every fight against him and work against every 1 vs 1 boss like him.

Main Mission: Dodge away from him when he attacks you, causing him to miss, then counter his attack with mid and high stance attacks. When he is out of ki, you can knock him out and press Triangle to attack him while down. Continue this process of evade, attack, knock down until he is defeated, and try to avoid allowing him to go on the offensive while you block. Spears and swords are useful weapons in this instance.

Sub Mission: Dodge him constantly until his ki is low and when it reaches below 30% use heavy attacks from mid stance. Keep doing this until he is brought down. The key to this fight is getting him to deplete his ki, as that is the best chance to do a lot of damage. A spear is a good consideration hear because of its increased range.

If you want to speed this rather long fight up, you can use Yokai water pots to nearly complete deplete his ki in less than 3 seconds.

Once your guardian attacks, he will get knocked to the ground, then you can run over once the target reticle lights up red you can hit him for a critical. Three to five of these should be all you need if you use Raikirri blade.

Tachibana Muneshige has three attack phases, each with distinct cues.

In the first phase, Muneshige Tachibana will attempt to remain close, hitting hard and fast with the intent to stagger into a lethal combo. The key to this fight in any of the three phases is to remain just out of reach while being close enough to punish him for missing, mainly by keeping his Ki from recharging. At any point in the fight he may activate his special blade ability, which is cued by him crowing about beholding the power of lightning. This is basically him using a lightning talisman on his sword, but be careful as this does give him extra oomph to his already hard-hitting attacks.

The second phase is cued around half health by Tachibana Muneshige claiming that he's not done yet.  Muneshige's attack pattern, on top of the first moveset, begins to include more jumping attacks that are also charged with lightning, whether or not he's activated his special lightning ability.

The third phase comes when he's at about a quarter of his health, when he exclaims while out of breath that he didn't expect you to fight this hard. A few important changes occur when the third phase comes into effect, such as the Spirit he summons attacking twice before disappearing, rather than once. He also begins to use his arrow attack more--typically this last phase begins with him using the arrow burst twice in a row. 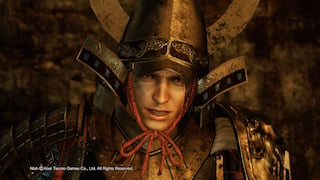 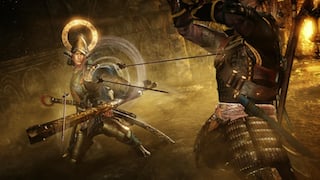 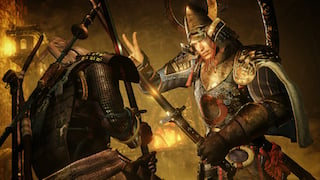