Spider is an Enemy in Nioh.

"Spiders are carnivorous arthropods. Under the influence of Amrita, they metamorphose into gigantic yokai that prey on humans. They cast sticky webs to immobilize their prey, then approach to begin feeding. Because spiders can climb walls and hang from the ceiling, they can attack the unwary from the most unexpected places."

"Spiders are generally solitary and silent by nature, but when transformed into yokai they are known to form packs. A single yokai spider is no great threat, but it is difficult to fend off a combined attack from an entire pack, and if they can manage to surround their prey completely that person will seldom escape." 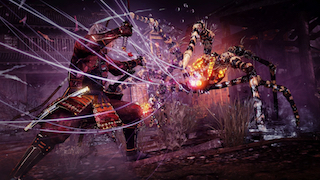