Sentry is an Enemy in Nioh.

"Sentries are statues that move through the power of a spirit-stone. Carved in the form of ancient warriors, they are placed out of sight at tombs, sacred domains, and the like as guards. When they detect an intruder, they immediately attack."

"Sentries move slowly, but a single blow from their massive swords can be fatal. They are also very hard to destroy, being made of stone. It is not clear exactly how they are triggered into action or how to stop them, so the safest course of action is to give them a wide berth." 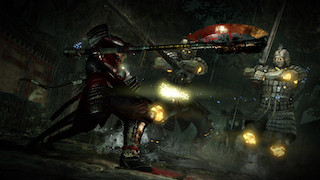