Raven Tengu is an Enemy in Nioh.

"Karasu Tengu, giant Tengu with wings like a crow's, have been known to humans since ancient times. They have keen eyesight and hard beaks and fly about as they please, controlling the wind. They have no trouble finding purchase even on sheer cliff faces and use their control over winds to attack when provoked, making them a troublesome foe."

"Tengu are said to be strange echoes of Garuda, Buddhist guardian deity and slayer of serpents and dragons. Reportedly, in some areas they coexist with humans. The Karasu Tengu on Mount Kurama in Kyoto's north are credited with teaching the yong Minamoto no Yoshitsune swordsmanship." 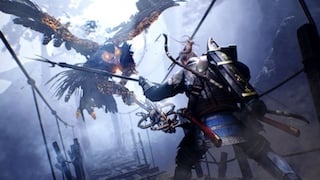 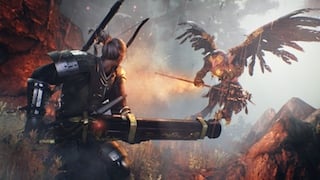